THE KNOT & THE WEAVE: BROTHER AND SISTER 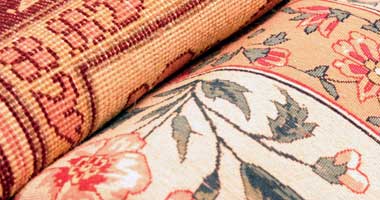 As a general rule, the knots per m_ is an important key to defining the value of an oriental carpet. There are however, a few exceptions..

Density and knots
A Persian carpet is a carpet made from fibres or velevet (mostly wool or silk), entirely hand-woven on a string and weave or on a base. Entirely hand-woven, Persian carpets vary in quality, which will be determined by the density of the wool and the number of knots. Although weaving techniques may differ according to the region or country they are crafted in, the basic principles remain virtually the same. The quality of the velvet owes to that of the fibre used to weave the carpet. Only normal fibres are used in hand-weaving. The principal materials that make up the velvet are wool, silk and cotton. Sometimes goat or camel hairs are also used.

The Persian or asymmetrical knot
This knot is achieved by wrapping the thread around a lip of the string and then passing it under the adjacent string lip and then bringing it back to the surface. This type of knot, also known as a Senneh knot, produces a more delicate frame.

The Turkish or symmetrical knot
This knot is achieved by wrapping the thread around two adjacent lips of string and then bringing it to the surface between the two lips. The Turkish and Turk Kurdish tribes of Iran used this type of knot, also known as a Ghiordes knot.
Once the weaving has been completed, the carpet is cut from the loom and the final adjustments can take place. The lateral sides are tied and darkened with thread to define the sides. The edges of the string that were attached to the loom are braided to make the fringe. The carpet is then cleaned of the dirt accumulated during the weaving. This adds brightness to the wool and softens the colours. The carper is then dried in the sun.